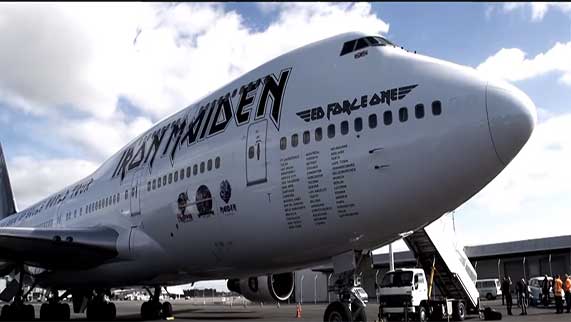 Well, there’s a teaser out there online, as the teaser of the upcoming game of the mighty British Heavy metal band Iron Maiden, created by the world-famous game developer Stern Pinball, where tracks like Somewhere in time, wasted years has been elected as it’s sound tracks!! Just like allowing other band’s machine sterns like AC/DC, Metallica, Aerosmith etc.

That mind blowing high-class game will allow their tracks too!! And to tell the truth that’s gonna hit on the business flor like hell for sure…. YEAH: D Their Video game like Legacy of the Beast is already famous beyond any doubt just because of its brand value!!

On the other hand, their front man the mighty Dickinson, recently pointed out on an interview that using of drugs as he failed to find the importance of drugs on a musicians careers are just a fuckin myth!! So, try to be cool enough as an addict doesn’t make any sense at all dude!! 😀

So, he suggested being more informative research on it for every musician who is drowning themselves under that crappy myth of it!! While having love is better than having drugs so why the fuck you care about shit anyway?! 😀

Even bands like Black Sabbath, Deep Purple consider that statement of Dickinson’s is true!! On this recent autobiography like: what does this button do?! He never mentioned about his private life of the family life of his wives and children’s rather than he pointed out his own mental dilemma since his childhood for his horrible parents!!

But these all obstacles never ever restricted him from being most amazing Heavy Metal front-man ever, a successful entrepreneur, Commercial pilot, Fencer, writer, Ph.D. on History and Music etc.!! GOD……. 😀

The key is to reinvent yourself once again…….

Even Iron Maiden’s brand-new Beer Light Brigade Golden Ale is getting commercially successful as hell already!!!!!! Because now it’s on its way to a Million bucks product already and that will go out for

charitable circumstances!! DAMN THIS IS WHAT LEGENDS ARE….. 😀

Now let’s take a look around to the recently announced tour dates of their album Legacy of the Beast:

This site uses Akismet to reduce spam. Learn how your comment data is processed.

Another disappointing news for the Metal lovers in the time of fucking COVID 19! And especially for the hardcore fans of the Lamb of God or abbreviated as Lamb of ... Read more

HOLLA Lamb of God fans! 😀 There must be some good news for you all!! ROCK ON!! 😀 Your mighty LOG just grabbed another RIAA certification for their 4th studio ... Read more

As supporting their latest album, we are not your kind, Slipknot already announced the date of their European tour  with another headbanging band Behemoth, who’s considering as the best 21st ... Read more

Just like old is Gold. Still, for the new generation of Rockstar’s, legendary AC/DC’s all-time greatest hit Highway to Hell still got the tribute,  From the modern day’s Metalheads like ... Read more

Iron Maiden, talks about their biggest production ever, The legacy of the Beast! And still no plan for retiring! HAHA…. 😀 While you are playing their video game, you got ... Read more

If you think, the theory of Music or Music Theory makes it more clinical and boring you are absolutely wrong! That made it more intellectual and interesting,  A player like ... Read more

Dave Mustaine, one of the leading Thrash Metal Icon and the band leader of Megadeth officially announced that he’s having throat cancer just like,  Another Metalhead like Bruce Dickinson of ... Read more