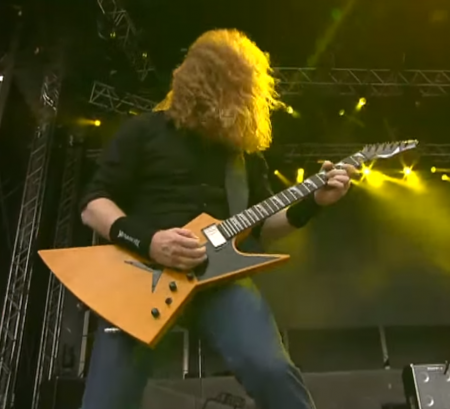 Megadeth’s David Ellefson is back with his mighty thrash label!! If you know the legendary bassist like David Ellefson of Megadeth, who’s creation Combat Records (1980) will relaunch in next year after so many times of changing it’s ownership it still leads the way to make famous other bands like Raven, Wrath, Helstar.

In the era of dump heavy metal bands or albums, that’s really a headbanging initiative for all the metal lovers to re-launch Combat records again for the love of music!! Yeaahhhhh!! 😀 😀

On the other hand, he confirmed the right to rock as the follow-up album Dystopia (2016) and he’s enjoying his ideas of brainstorming as a lyricist by keeping the band’s line up on his mind.  Megadeth is looking forward to several shows in South America

A heavy metal band like Megadeth, who got it’s well deserved Grammy of the year 2017 in their 34 years long musical career for their best metal performance is a leading metal band of the world who rocks with the metalheads like Dave Mustaine David Ellefson!! wooooooow!! 😀

After doing 100+ shows when drummer like Shawn Groover at 51 years of age, also admits that he’s thankful towards his band leader Dave Mustaine, ex Metallica for giving him a career!! That proves that what a true metalhead really are!! Humble, Hungry and smart!! 😀

Just like the touring festival vehicle of the mighty Megadeth Gigantour seems gonna rock after the end of our waiting of four fucking years!! Hopefully, in 2018, that’s gonna happen once again in the history of Heavy metal music!! HELL YEAH!! 😀

A festival like it can’t be a headbanging shit just by the performances of the 2-3 bands!! So they decided to add more local Metalheads of the local bands, this year!! HOW COOL IS THAT?!

Even A true Rockstar like Dave Mustaine from Megadeth declined even sign of the tour if the performances of other contestants frustrate him!! A true Metal God!! 😀

Recently he just woke up from the surgery of the injured neck but still just look at his quality of attitude, aggression which represent their stubborn psychology and emotional attachments.

This site uses Akismet to reduce spam. Learn how your comment data is processed.

Another disappointing news for the Metal lovers in the time of fucking COVID 19! And especially for the hardcore fans of the Lamb of God or abbreviated as Lamb of ... Read more

HOLLA Lamb of God fans! 😀 There must be some good news for you all!! ROCK ON!! 😀 Your mighty LOG just grabbed another RIAA certification for their 4th studio ... Read more

As supporting their latest album, we are not your kind, Slipknot already announced the date of their European tour  with another headbanging band Behemoth, who’s considering as the best 21st ... Read more

Just like old is Gold. Still, for the new generation of Rockstar’s, legendary AC/DC’s all-time greatest hit Highway to Hell still got the tribute,  From the modern day’s Metalheads like ... Read more

Iron Maiden, talks about their biggest production ever, The legacy of the Beast! And still no plan for retiring! HAHA…. 😀 While you are playing their video game, you got ... Read more

If you think, the theory of Music or Music Theory makes it more clinical and boring you are absolutely wrong! That made it more intellectual and interesting,  A player like ... Read more

Dave Mustaine, one of the leading Thrash Metal Icon and the band leader of Megadeth officially announced that he’s having throat cancer just like,  Another Metalhead like Bruce Dickinson of ... Read more